Download the latest version of the SS to EMU Tool below. Although the user can select the language (English or French) within the tool on the Country Language Set Up Tab, for your convenience the files below are saved with either English or French pre-selected.

The SS to EMU tool assists countries in reviewing their service statistic data, an important step in itself, and then converts the data into EMU, which can be compared against mCPR from surveys or other models. The tool can also be used to estimate EMU at lower geographic levels (states, districts or any level that has service statistics) where survey data may not be available.

The EMU can also be used as an input into the Family Planning Estimation Tool (FPET), which calculates estimates for current and future mCPR, based on a variety of data sources. Inputting the EMU allows FPET to consider service statistics in its calculation of estimated mCPR, unmet need and demand satisfied by modern, and can play an important role in recognizing changes in trends between surveys. Service statistics data is generally available on an annual (and even monthly) basis and can provide the model with additional data on changes in prevalence after the last survey. This is especially useful in cases where survey data may be outdated or where dramatic social changes or expansions in family planning programming have occurred since the last survey.

The two graphs above are examples of how service statistics data is reviewed for quality. The first graph illustrates the number of users that have been estimated by method, based on the service statistics data input. The second set of graphs compares the estimated method mix based on the service statistics data compared to the last survey. These two graphics are reviewed to sense check the data – are trends in individual methods reasonable given current programmatic efforts – and look for any indications of errors – is the method mix substantially different than was found in a recent survey? If so Is there any reasonable explanation or could this indicate an error in the data?

The above graph shows the final results of the SS to EMU tool, a comparison of the EMU (estimated method use) calculated from the various types of service statistics data provided, compared to survey results for mCPR among all women and FPET estimates of mCPR among all women. The goal of this graphic is to allow the user to review the estimates produced by the tool in comparison to other sources of data and determine which data comes closest to approximating survey and FPET results and whether that data can be used in FPET.

How are these results used in FPET

The EMU values produced by the SS to EMU Tool can be entered in FPET along with Survey results in order to inform estimates of mCPR. Incorporating the service statistics data can improve estimates in years beyond the last survey, informing the trend with more recent data as well as narrowing the confidence interval around the estimates. See the graphs below: 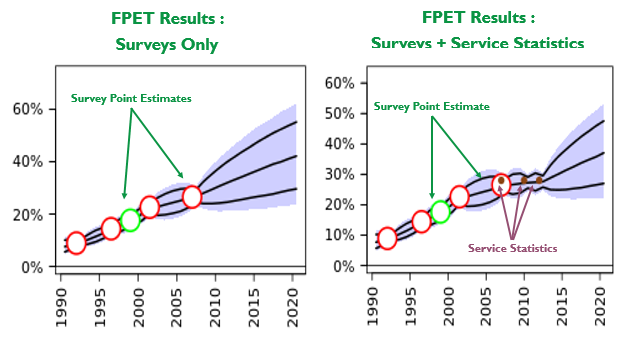